The next update to Voltage Modular 2 will hopefully help.

Kozzerog wrote: ↑
Mon May 25, 2020 7:17 am
I use a Ryzen 2500U laptop (8GB RAM, Win10) - not super powerful of course, but now with the Version 2.0 update, Voltage Modular is the only synth I have performance issues with. To compare, I can use ten or more instances of complex Arturia Pigments 2 sequence patches with my CPU usage barely exceeding 50%.

It has become basically impossible for me to playback any sequence presets in VM now. The CPU meter in FL Studio hits 99% and I get severe audio stuttering. Same thing happens in REAPER, although REAPER's CPU meter only displays 15% CPU usage. This was not a problem at all with VM 1.XX. Even some really simple polyphonic user presets consisting of one oscillator, one envelope controller and one amplifier now eat 50% of my CPU. This was definitely not the case before. Hope the weak Ryzen performance will be addressed asap. I wasn't very happy with the VM 1.XX performance on my machine already but it remained largely usable. Now VM has actually become unsusable for me in most cases as I am really not into the bounce-in-place workflow. Of course it's awesome that we get such an expansive free update, I just cannot enjoy it at this moment.

I'm told the next update will have some additional tweaks that should help. The software devs apparently found some really good CPU optimizations that will make a difference.

the newest version, 2.0.15, fixes a lot of cpu problems in cubase pro 10.5.12 (on windows 10 pro (1909)). i can play my own presets, and the cpu usage was never so low. but it sometimes erratic, one preset won't play without dropouts (uses two little harmony's and some other stuff not much, no complex patching, only the sampler and the chord module from... o all those developers.).

i have i7 6700K, doesn't seem much in these days, but still it can hold big patches from voltage modular, softube modular and reaktor.
my own built desktop, perhaps that makes it much easier to have properly working system, many factors. (i built my own desktops for 20 years or more, more.. and for others..). and still can add more synths...

i will wait for the next version. if it fixes that preset. or else i will go kayako...

bought the ms-20 vintage bundle (had the one year bundle), thanks for the special price, it is worth it. and bought another small bundle.
and bought already of course bought the vector and the vintage voice bundle. nice bundles, very nice... module count 344..... wow...

strange message perhaps, but it is also a way to say i like VM (and softube modular and reaktor blocks... why do i say this, here!), but VM is most workflow focused modular.

o yes, but this is for support. when loading a preset, it takes sometime, that there aren't "clicks" (no asio overload), it seems that VM adjust itself... this can take 10 or 20 seconds or so.

but like i said; you mention a new version, with more cpu optimization, so i will wait. it can always backfire, an optimization...

Give it another try. It should be fixed now. The sale price was overriding the upgrade price.

Year One bundle owners should see the price as $10.

Give it another try. It should be fixed now. The sale price was overriding the upgrade price.

Year One bundle owners should see the price as $10.

Thanks for the fix.
But I also noticed another mistake. TB Filter and TB Oscillator are also available in the Cherry Audio Year One Collection, but are still sold.

A few words about the new version.

Unfortunately, this causes more load on the processor in the same patches. I have a very old Xeon e5450 processor. But in 1 version, I could at least 5 instruments to play, and now a big load.

I also did not like the new color. Moreover, one of the modules changed color, the other did not. For example, an 8 step sequencer and a 16 step sequencer are painted in different colors.

The next update should improve CPU performance.

Greg, this should be free because the TB Vintage Bundle modules are part of the Cherry Audio Year One Collection.

That is, how can you buy what you already own? 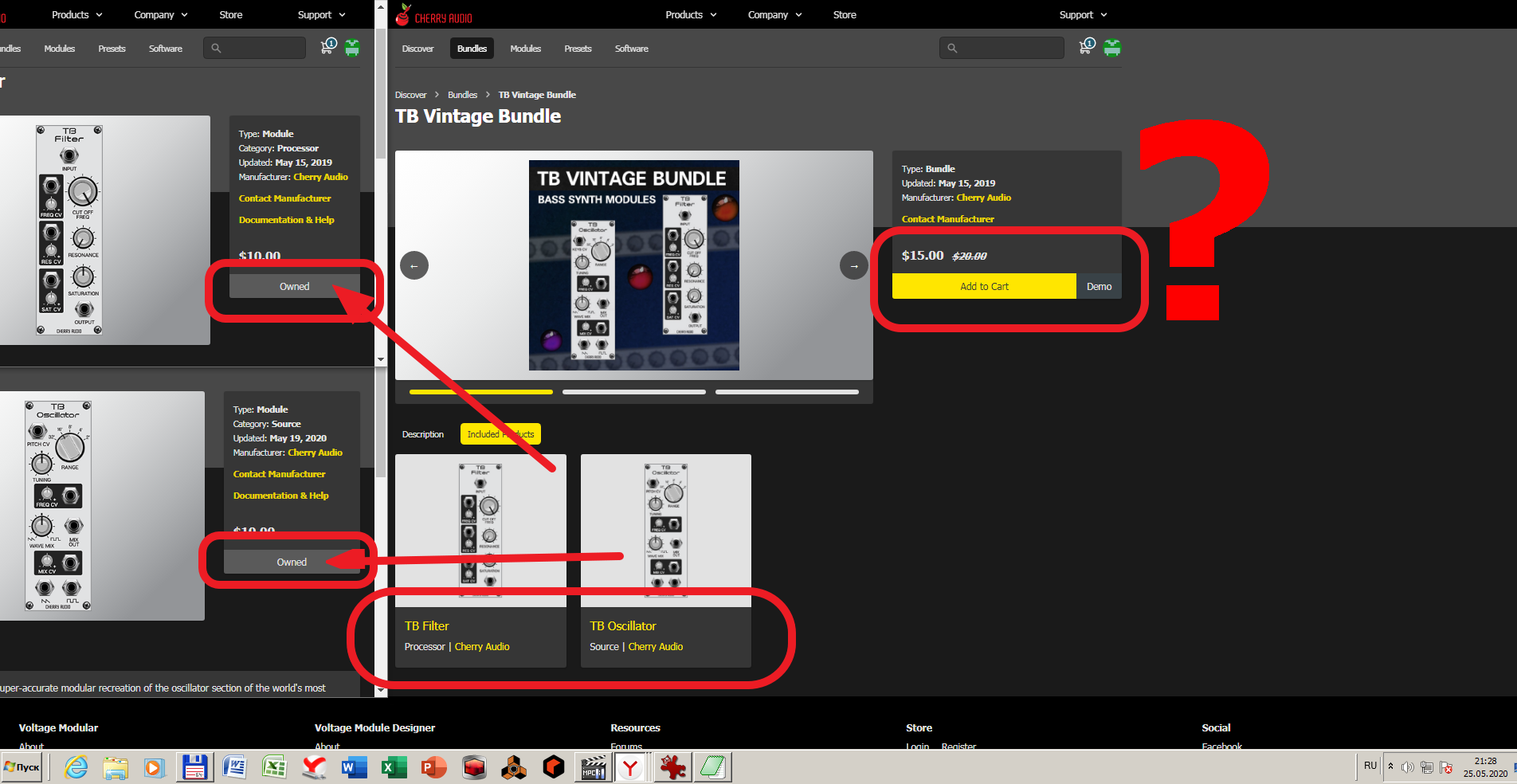 Thanks for reporting that, I'll pass it along!

Please consider the option to allow the users to chose the theme: Light or Dark. Or at least make the SynthVoice theme a bit lighter.
We are perceiving colors in different ways. I liked the old theme,
While I do feel this one is good, its hard for my eyes (I generally prefer Light schemes: OS, IDE, browser, except terminal)

I like the new colours, but a dark vs light theme would probably be a good solution to make everyone happy..

Looking forward to the new CPU updates for version 2, just wondering if installing an SSD into my production PC, might help with some of the audio stutters?
Top
Post Reply
148 posts