by AndyMac
Would love to see a series of fully Buchla style modules available. Some of this is already there, and constructing a Complex Oscillator is not too hard with two Super Oscillators and a few other modules, but I'm sure that there are some more of the more esoteric modules that would be great to have. I must admit that I may look at whether I can add some of these to my collections, but it would be great to see them from any source.

And my other personal "grail quest" modules are the Mutable Instruments devices. I have the available Softube versions, but much prefer VM and pine for them here. And Softube doesn't have them all anyway.

There's even a publicly available code-base, but I haven't looked into the level of effort required to port them to this environment... yet

So many modules, so little time

by wardj48
Since you mention Buchla (or Buchla-style) modules: I see Softube has just added the Buchla 296e Spectral Processor; you might want to have a look at it. They are quite proud of having an exclusive relationship with Buchla USA, so too direct an emulation of this module might get you into some hot intellectual property water. (Note that I own a copy of Softube's Modular, and also a hardware modular that is almost entirely Doepfer.) I was going to buy the above-mentioned module ($99!) but then I saw Cherry Audio's Voltage Modular, and thought, "Well, this is an I.Q. test: a whole synth, with an SDK, for the same price..." So I did buy VM Core; but my coding skills are rudimentary at best. What I want to do - or hope someone else will do - is some variation on the idea of spectral analysis/resynthesis/morphing... there are lots of modules and plugins out there that do some variation on this, but they either have some critical shortcoming or are outrageously expensive. (For the great-grandaddy of all this, see Symbolic Sound's Kyma... a hardware/software hybrid that's way beyond my means...) Looks like there are some pretty talented folks building for the Voltage platform... Build it, and I will come...

by scook
While waiting for Mutable Instruments and Buchla modules in VM try loading Softube or VeeSeeVST modular into the VM host module. Not the same as running native modules but at least they may be accessed inside VM.

I too have Softube and was put off by the price of that module, so I dove into building something similar for VM.

Hopefully to be available sometime soon.

by OldBillLee
Clouds or some kind of Granular module.

by PaleSkinnySwede
I'd like to see a poly version of the Cherry Audio Notch filter. Putting a Low Pass filter in serial with a Notch filter is a nice way to make a pad sound a bit less dull.

Secondly, a Random Generator. It doesn't have to be a "Source of Uncertainty" but it wouldn't hurt if it was

by evo2slo
A unison module, similar to Poly Unison, that allows polyphonic pitch and gate CV inputs. Poly Unison only allows monophonic inputs so it can't be used with chords.

I'm think how that would work. It will be an awful lot of voices to be handled by the oscillators.

But you can do a unison poly patch if you're a bit creative. It's not super-exciting but it uses 16 voices in total. 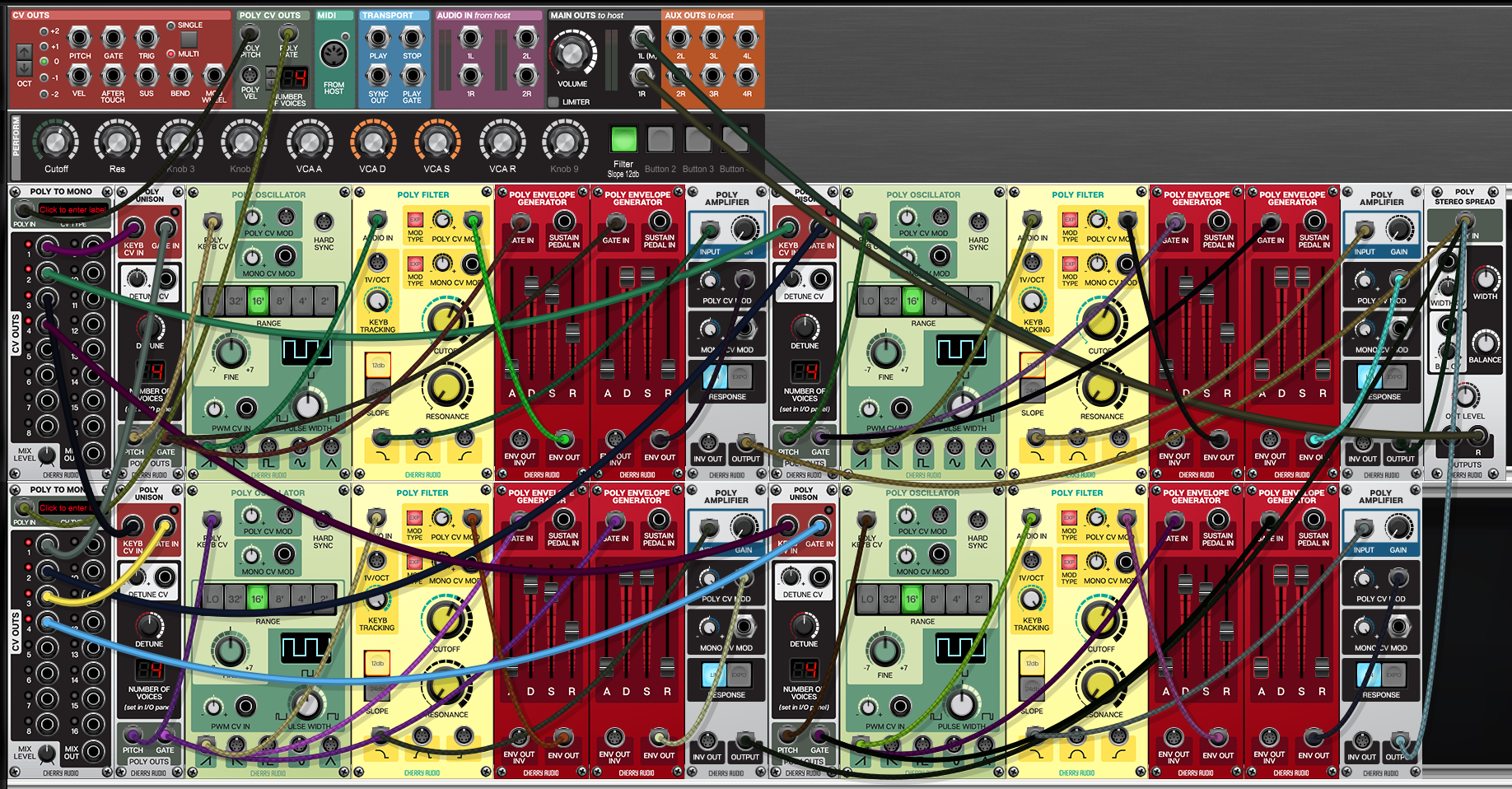 I can probably send you the patch if you want it. Send me a direct message in that case.

by evo2slo
I'm not able to see the image you posted for some reason, but I'll send you a DM for the patch. Thanks!

I was messing around some more with it and found that the PSP eFeMerizer allows a pretty easy workaround for a six voice unison with chords. Ran all the poly pitch outputs to the inputs of two eFeM modules, set them all to the same waveform and tweaked the freq shift controls for detuning. I'd still prefer a single module like the Poly Unison (with poly inputs) for this though.


edit: Doesn't look like I've participated enough to send a DM yet. Better get busy and then get back to you.