So, it's been over a month since VM was officially released and more than 2 since 'early access' strated. To this day there are no reviews, no overviews/impressions, barely no new modules, no buzz on the Internet... Even their own FB page was last updated over 2 weeks ago

Now I don't mind the price that I've paid considering the wealth of stuff I got for it, but I was also buying the future of VM - prospect of getting original and ported modules, user presets, new VM features, etc. I'm not one to go on KVR and sell my license (and they are already on sale) but I feel stupid now recommending my friends to get VM and posting about it on my FB... I'm holding off with getting the Additive Osc, Random Task, 16-step Seq and VCF-20 because if that's all that I'm ever gonna get then I'm not sure I want to invest...

How hard can it be to send the copies out to media outlets like Sonicstate, S.O.S, ADSR, Synthopia or people like Cuckoo and countless others for review?

I'm not writing all this to be negative. Quite the opposite - I feel confident that VM is a great product with huge potential, but it needs a push and I'm not really seeing it

The reviews are coming. We've invested alot into Voltage Modular. More modules are definitely coming. Thanks for your patience! (=
Top

Cherry Garcia wrote: ↑
Tue Nov 06, 2018 3:52 am
The reviews are coming. We've invested alot into Voltage Modular. More modules are definitely coming. Thanks for your patience! (=

How about that shopping basket in the store? I'd prefer to optimise the bank fees for my purchases

We are taking all feedback and working on improving things so that when our press hits - the kinks/issues will be more or less ironed/taken out.

We just made it so that you can download the software without trying our Core Demo and encouraging others to try 3rd party modules and bundles from our partners like PSP. 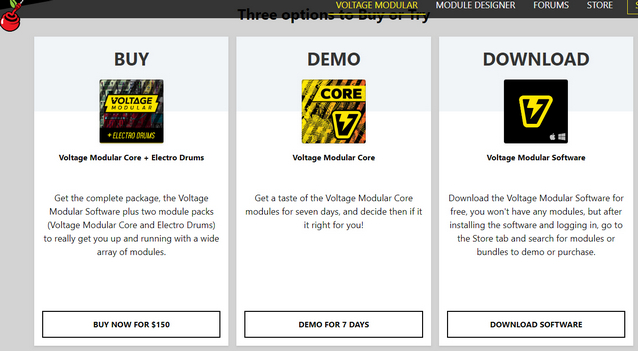 
Of course, we aren't a mega corporation so everything takes time. Thanks again for your concern, but we are VERY excited about Voltage Modular and Module Designer and are looking forward to all the exciting modules that are coming down the pipeline.

Thanks for your support! (=
Top

About Voltage Modular is not audible on the Internet. It is a fact. But in my opinion, this is the best modular synthesizer. I tried different modular programs, and this is the most convenient.

I recently bought all the PSP modules. I would also like to get a sampler and a wavetable module.
Top

The Vult modules are out and they sounds like nothing !
Incredible filters , for now, I have bought the low pass gate and it sound better than my analog synth, so exciting, I will purchase all his products for sure.
Whoah.
More CV input and attenuators !
Top

Agreed. I'm keen to purchase extra modules, but will hold off until I can buy multiple items at once.
Top

Thanks for the feedback! We are planning on this. For now, we've added a few more demos to try out the various modules. Just go to the Store tab in the software and look for any modules that have a demo icon next to them. 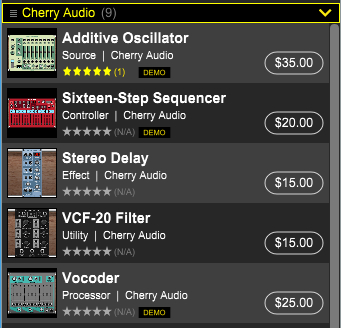 Make sure you have version 1.0.9 of Voltage Modular.
Top

student9v wrote: ↑
Wed Nov 07, 2018 8:09 am
About Voltage Modular is not audible on the Internet. It is a fact. But in my opinion, this is the best modular synthesizer. I tried different modular programs, and this is the most convenient.

I recently bought all the PSP modules. I would also like to get a sampler and a wavetable module.

Sampler is coming very soon, and it's REALLY cool (well, we think so). Wavetable oscillator is definitely on our list as well.

To the OP who mentioned "no new modules"... we have a lot of new modules in the pipe, stay tuned!
Top

I think, it is in part our fault. I´m stuck in some audio work for others. But when I have some more spare time I plan to do a video about the Additive Oscillator.
Sometimes it is good, when a product can be developed without this big rush. I´ve seen this with the Ableton Live 8 desaster. They finally took a slower pace and made sure that their ecosystem works. If it´s a direction I like is moot.

My gut feeling tells me this has a good prospect and Cherry Audio obviously are aware of things I like when it comes to the use of a complex playground like this. Ease of use, integration into your DAW, reliability and sound quality.

They have strong competitors but I´ve chosen this modular approach because it feels right. Relatively easy-to-grasp-modules lead to quite complex results. And they changed their approach in virtual land for the better and extended the possibilities.

This is no flashy copycat stuff for some hipsters. It is already in stable form. We all have to persist through a period of not being so popular until the first big hit makers say. "I´ve used Voltage Modular for this". Maybe Cherry Audio can approach guys like Noisia (they are keen on such stuff) or other projects well known for their sound design. I think the D´n´B communitiy might be a target audience. I see Fabfilter as a good example. It feels like everybody uses their EQ nowadays. But they were very small when they started and made it to this.

I will buy some more modules and the idea of company packages is great. We all need to keep doing our stuff and I want to help them to become more popular, because you said it. It is a great product.
Top
Post Reply
20 posts