the all new Beats2Pitch Bundle is released, containing 6 modules: 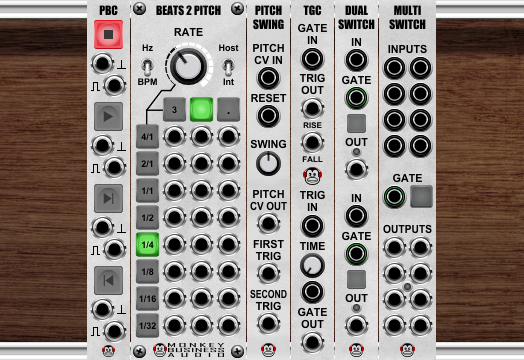 Buttons with trigger and gate output

Playback Control (PBC) features 4 buttons. Two of them are mutually exclusive toggle buttons (stop and start) and the other two are regular push buttons. All of them are equipped with a trigger output that fires on button down and a gate output that goes high while the button is active. Very useful for controlling multiple sequencer modules at once.

Beats2Pitch lets you run oscillators at a given tempo and note length by outputting the respective pitch CV. The tempo can be set in BPM (12.0 -300.0) or in Hz (0.2 - 5.0) or it can be retrieved from the host application.

What counts as a beat is set by the toggle buttons surrounding the output field. Available divisions are 1/32nd, 1/16th, 1/8th, quarter, half, full bar, 2 bars and 4 bars, each as whole, dotted and triplet.

Generate triggers with a swing

Pitch Swing is basically a clock generator that outputs a trigger signal every time a cycle of the given PITCH CV starts. It can add a swing to the clock signal, where the SWING amount determines the length of the first cycle relative to the second cycle. Both triggers have their own output jacks as well as the adapted pitch CV.

A high signal state at the RESET input (greater or equal 2.5 V) resets the swing cycle.

Convert Triggers to Gates and Gates to Triggers

Trigger Gate Converter (TGC) is actually two modules in one:

The part above the monkey converts gate signals to triggers with dedicated outputs for the rising and the falling edge of the gate.

TIME can also be controlled by pitch CV following the 1 V/octave rule. The gate will be opened for the duration of a single cycle at the corresponding pitch, where a 1/16th note at 120 BPM equals about -3.03135971V. This allows for tempo-synced gating.

An input signal is considered high if it is greater than or equal to 2.5 V and considered low if it is less than 2.5 V.

Switch Signals with a Gate

A green LED above the output jack indicates whether the signal is passed through or not.

Switch 8 signals with a single gate

Multi Switch lets you switch up to 8 different signals with a single toggle button or gate CV. When the signal at the GATE input is high (greater or equal 2.5 V) or the toggle button next to the GATE input is active, the signals at the INPUTS are passed through to the appropriate OUTPUTS, otherwise the output is 0 V. The signal at the upper left input is passed to the upper left output, the upper right input to the upper right output and so on.

A green LED in the center of the output jack area indicates whether the signals are passed through or not.

The patch also features some drum modules by Misfit Audio.
The Super Oscillator module is used as an envelope generator for the synth sounds.
All melodies are randomly generated.


Here is the patch used in the video 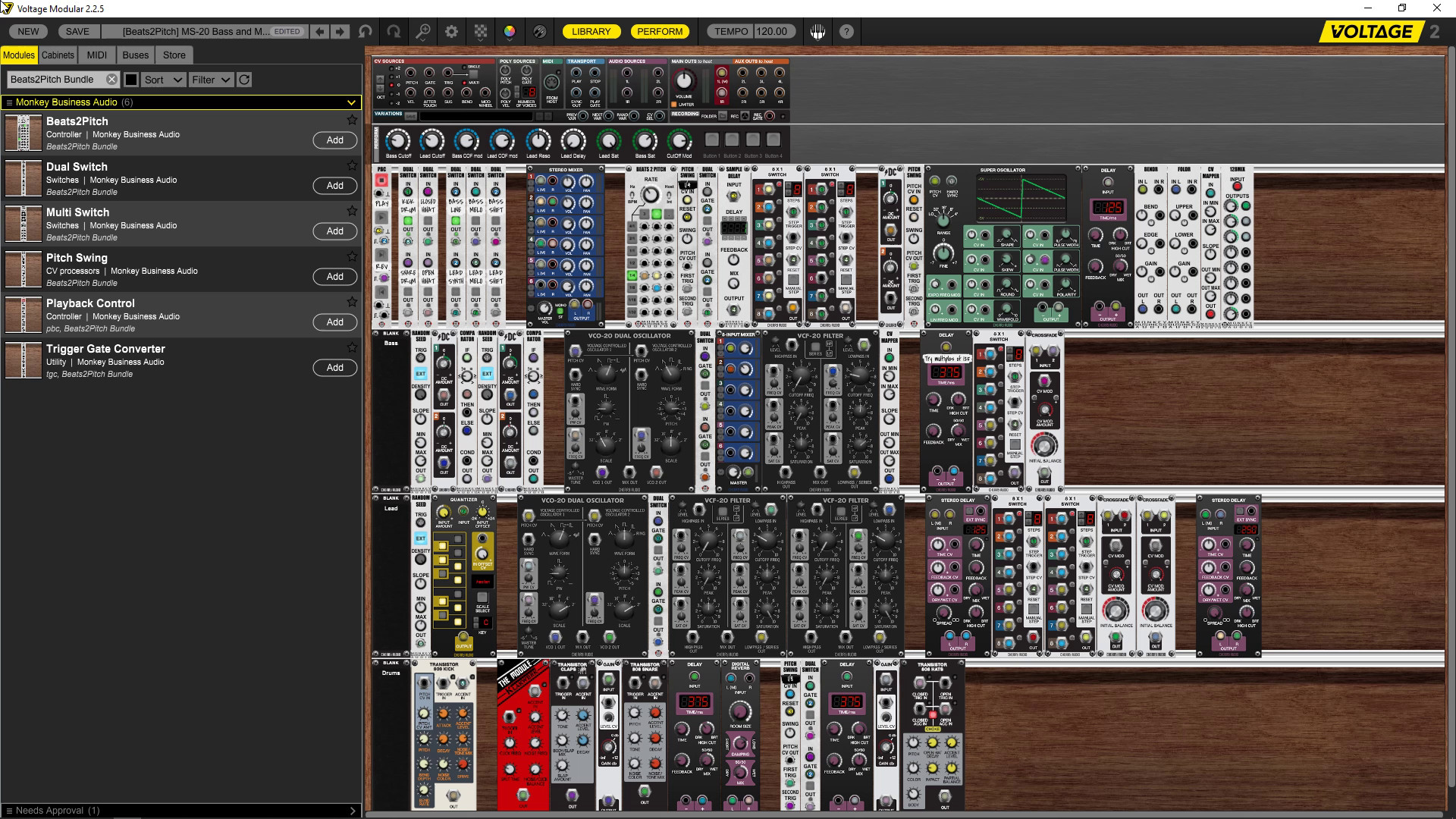